Board your Jet boat from the confluence of the Clearwater River in Clarkston Washington and learn the early history of Steamboat travel along the Snake River as well as other interesting historical facts native to our Lewis/Clark valley.

We’ll travel to Buffalo Eddy…where ancestors of the Native American Nez Perce created the images known as petroglyphs.  Shrouded in mystery, without the benefit of asking the creators of this rock art, no one knows for sure their meaning.

This sacred site takes its name from the images on the Idaho side of the Snake River where bison are depicted as being chased by Indians on horseback.

There are several styles of petroglyphs at Buffalo Eddy. Some are naturalistic with human figures and animals such as big horn sheep, elk and deer.

Stick figures at the site hold an item that looks like a dumbbell. Some believe that this may represent a double headed rattle or paddle. Groups of naturalistic animals and humans in a single panel appear to tell a story related to hunting.

Other petroglyphs, consisting of abstract designs and patterns that include dots, circles and triangles, are considered to be the oldest at the site.

Watch for rocky mountain bighorn sheep, deer and many species of birds along the way. You will also discover numerous Basalt Lava outcroppings. Intruding into loose volcanic ash which is unable to support the intrusion gives us the uniquely shaped columns we see all along the Snake River of Hells Canyon! 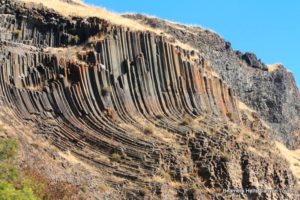 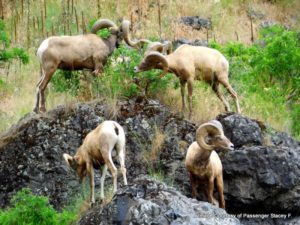 Scheduled Departure Days And Times Tuesday, Thursday and Sunday-10:00am and 2:00pm May thru September. Please call for standby dates and for groups of 14 or more passengers.